Here’s what could be a shocking fact to many of you reading this article: Decades has existed in Washington, DC prior to 2016. In fact, from 1997-1999, a nightclub called Decades playing the best hits of the 70s, 80s and 90s on multiple floors existed in a space one block south of the square footage occupied by Ultrabar on 9th and F Sts. NW. Amazingly enough, as the current four-level Decades at 1219 Connecticut Avenue NW spins beloved hits from the 90s, 2000’s and the modern day, it’s DC Metropolitan area nightlife veteran Megawatt DJ Jon Paul who amazingly has, and currently does, spin at both the classic and current Decades locations! When describing how he has viewed his work as a disc jockey in the DC in a career that literally spans “between the Decades,” the veteran mixer notes that he enjoys “delighting and exciting crowds with outstanding performances.” If the sweat-drenched and hoarse-voiced bodies leaving Decades’ 90s floor on most any Saturday night when Jon Paul is behind the decks are any indication, he’s definitely achieving his goal. The secrets to his success and his thoughts about old versus new Decades? Well, they’re right here for you to enjoy! Retro is new again (and again)!

So, when did the old Decades open as a party, how long did it run, what exactly was the concept behind the old idea, and do you believe it was a success?

I just opened up my Quickbooks files and when I pulled up my files for the new Decades, I instead pulled up the files for the old Decades. Took a look back through those, and I found out that the old Decades started in September of 1997, and ran through October of 1999! We had a three year run, with the 70s, 80s and 90s floors, and then we closed when the Pollyesther’s [retro-themed nightclub] chain opened in DC. The old Decades and the new Decades actually have had kind of the same impact on the city. It was the hottest thing back then on Friday and Saturday nights, running out of the old The Ritz space. At the time the concept was rather cutting edge. 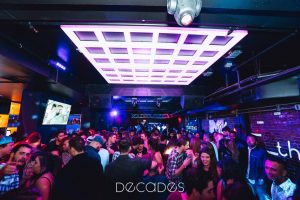 It’s so different now with the 90s music, actually. Back then at Decades, the 90s floor was this floor that catered to a crowd that wanted current and cutting edge dance music. Snap’s “Rhythm Is A Dancer,” Corona’s “Rhythm Of The Night,” No Mercy’s “Where Do You Go?,” the clubbier stuff. At the current Decades, there’s still a space for that stuff, but I definitely play a lot more pop music. Third Eye Blind’s “Semi-Charmed Life,” Blink 182’s “All The Small Things,” Good Charlotte’s “Lifestyles of the Rich and Famous,” a lot of the one-hit wonder bands from the 90s, that’s been really popular. What’s crazy about that is that I would’ve been laughed out of the club for playing that back then, but now, it’s totally expected! I’m also playing hip-hop, stuff like Montell Jordan’s “This Is How We Do It,” 2Pac’s “California Love,” and Notorious B.I.G.’s “Mo Money Mo Problems.” 90s modern rock is now sing-along classic rock and 90s hip-hop songs are now rap-along throwbacks. Customers aren’t just dancing, they’re singing along at the top of their lungs all night! It’s crazy!

If you were telling someone who’s never been to 1219 Connecticut Avenue before about what exactly happens on the 90s floor and why it’s so much fun, how would you explain it?

The 90s floor has been such a surprise in so many ways. Decades’ music video system doesn’t get enough credit. Since the opening in November through nine months later right now, that floor has evolved into something completely insane. The music is the big seller on that floor, and some of the more super pop-friendly songs I play just don’t have the same impact that they do in the club without the video. All of the sing-alongs, the videos really set them off. The videos add so much to the night. I mean, where else can you go from The Bloodhound Gang’s “The Bad Touch” into Whitney Houston’s “I Want To Dance With Somebody” into a dance mix of Shania Twain’s “Man I Feel Like A Woman?” There’s been nights when I’ll play that exact combination of songs and I get girls high-fiving me! That’s not EVERY night, but come check me out on a Saturday night, and as long as it’s 90s and the crowd — especially the girls — are digging it, from house to pop to rap, hell if it works, almost anything, I’m open to playing it. 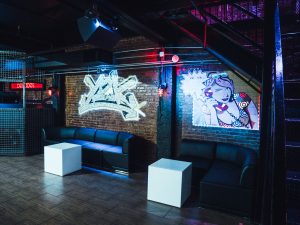 To what exactly would you attribute the popularity of the more pop-driven 90s tunes these days?

This is kind of related to the same thing when the 80s were hot for a bit ten years ago. When I would be DJing in a club at Kansas State University in the actual 1980s, I couldn’t play something like A-Ha’s “Take On Me” or The Outfield’s “Your Love,” that more new wave or hard rock sound. I could get away with Michael Jackson’s “Billie Jean,” that more funk-driven R & B-style pop, but some of those big pop hits would get me laughed out of the booth. But, as things age, there’s definitely a novelty effect that takes over people’s tastes and nostalgia becomes hot. You look at concerts in 10,000 seat venues now and for the people who were teenagers and in college back in the 90s, they’re attending sold out shows right now for 90s bands like Matchbox 20 and Third Eye Blind.

And as far as the house and techno of the era?

The house and techno definitely have a place! People listen to that now and it’s their time to hang out and look cool at the bar, or sit with their friends in the VIP and feel like they’re having that socialite moment. Having lived through the era when it was the other way around and people might just lay back a bit for the pop but really go wild on the house and techno, it’s fascinating. But, who knows with trends? Soon, I could play some of those huge electronic records and have the dancefloor at Decades right now feeling like the dancefloor at Decades back then. I like playing all of the records I play, though. Crowds are reacting to everything.

Someone came up to the booth who was having their birthday party at Decades and requested “We Didn’t Start The Fire” by Billy Joel. I am still in that “I would never think to play that song” mode, but, I said, “why not,” and it worked. Crowd went nuts, what a reaction! Or, I got Deep Blue Something’s “Breakfast at Tiffany’s” too. I KNEW that was going to bomb, and instead, it RAGED. It’s weird, man. I’ll be at Decades some nights and I’ll look at the floor and outside of the demographic that lived through the era when a song came out as adults, it’s kids who weren’t even born when these songs came out and they’re just singing and dancing along. Maybe their parents played it? Who knows!

Overall, what would you say is the most significant part of the Decades Nightclub experience in 2017, and why?

Spice Girls, boy bands, the bigger electronic records, all of them it seems, people really love to sing. It’s funny. Sometimes I’ll think it’s time to mix out of a song and go into something else, but I know that the hook is coming and…yeah, can’t do that, hahahaha. At the end of the day, when you think about it, it’s the surprise moments like that which remind you that Decades back then and Decades right now succeeds as a concept because it’s really all about giving the people the best of exactly what they want. I had a blast back then, and I’m having a blast right now. I’ll see you on Saturday night!