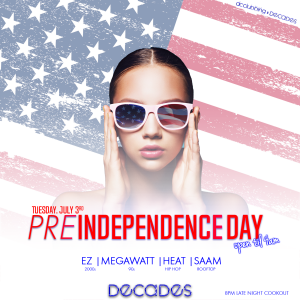 On Tuesday July 3rd DCClubbing and Decades DC join forces to bring you the most epic Pre Independence Day Party!

Featuring All Four Floors  – 2000s, 90s, Decades of Hip Hop, and Decades of Dance Rooftop – As well as a light night Cookout Featuring food from the grill on the luxurious rooftop and Decades starting at 8pm

We don’t think it gets much better than that !